Linked In Discussion about Vodka

July 27, 2012
We have had a vivid discussion about Armenian brandy in one of the Linked In discussion boards.
George, a fellow which has an open minded approach posted this reply below: 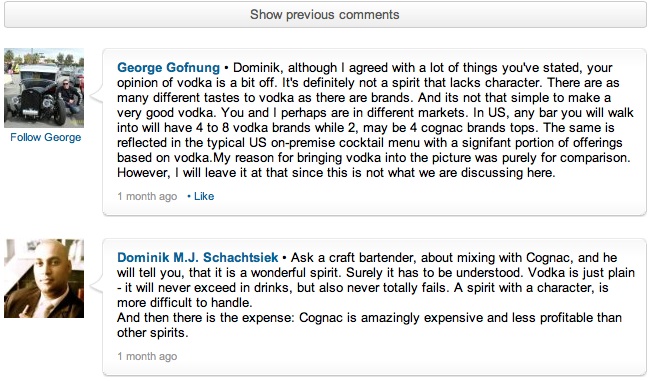 But the biggest problem is, that vodka is internationally not consumed the original way. That means with a piece of bread, the chilled vodka straight up [in a oversized shot glass] and optional a chaser.

I really believe, that this Russian vodka drinking ritual [see youtube video below] is the way how to drink vodka - and only then the different distinctive characters make sense.

But really vodka is consumed almost 100% as mixed drink - mixed with Red Bull [argh], orange juice, cranberry juice - and sometimes as Vodka Martini cocktail. As a Martini, the differences are also muted, due to the fact, that neutral alcohol is like a sponge and assimilates other aromas - even if they are added in a very small quantity.

The only big distinction between the vodka brands are entirely a marketing exercise: target group, pricing structure, style of advertisement, marketing budget and so on - you got the point!
The whole success of vodka is basically based on perception - and yeah definitely deception.

Am I here too opinionated?


I will post an old post of my previous iteration of my blog, where I was much more "fundamental" about vodka... stay tuned!