July 16, 2012
I still remember, that this beer liqueur was awesome. Quite bitter, but a lot of maltiness. Need to do this again!

Just enjoy one very old blog post of mine... 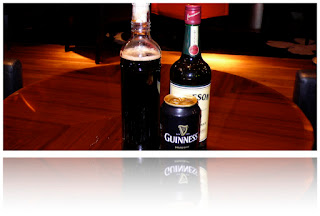 Jamie Boudreau posted few days ago his quest to make a beer liqueur! Very good idea Jamie - so there is another challenge. Jamie did the whole thing with Belgium styled ale.


Hm, I am not from the it-has-to-be-fruity-fraction and my thoughts were more to benefit of the bitterness of the beer.
And unfortunately there are not so many interesting beers around in Dubai - so I went into my store room and found: Irish Stout! We had few cans of Kilkenny, I thought of initially- but we already sold them all; so Guinness supposed to be fine for my experiment.
I cooked it down (took the foam sentiments of), added first maple syrup and then a bit sugar. I tried and I felt that I am on the right way! But this spiciness supposed to be supported - so I charged it with 2 cloves, a piece of cassia bark and a tiny little piece of vanilla.
Eureka! But now I had to charge it - and please: I really try to avoid vodka as much as possible...
Irish - Malted Grain - Jameson came into my mind...
It is not heavy, so it doesn’t interfere to much the beer flavors (and bitterness) on the other hand it brings some quite nice flavors along which is just beneficial.
So the bottle is done! I’ve decided that it should stand for a while with the spices inside. As there is relatively less Whiskey in, I have to “dilute” it later again with more whiskey
No beer-liqueur cocktails yet - let me know, if you have an idea!
Cheers!