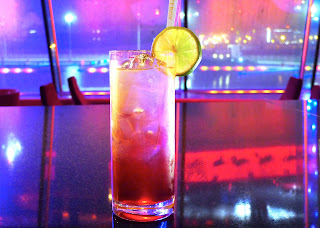 There are few mixed drinks, which I really appreciate as top notch - and even fewer in the category of highballs and long drinks.

The El Diablo might be invented in the 1940's but the exact history remains unclear. There was actually a panel who discussed this drink for the New York Times. There the El Diablo didn't fared well with the taste of the panelists.
Personally I have came across this drink more than a decade ago. And as soon as I tasted it, it became one of my favorite tequila drinks. Maybe poor products and poor measures can put this drink off - but produced properly, there is a lot of magic, which is created, when the sum is greater than the parts.

This is a very simple recipe. But for me, the taste of the ginger ale is almost disappearing in favor of the tequila aromas. And the crème de cassis is just giving enough sweetness to balance the lime and the fruit aromas are modifying the overall taste into »exciting«.

It might sound funny, but the drink taste like a longer, lower alcohol version of tequila, with a hint of fruit. The effect is similar to the one of an Old Fashioned.


But there is some controversy. A lot of recipes on websites and new published books exchanged the ginger ale, with ginger beer.
I really cannot say, what the traditional recipe said.
As during the prohibition ginger ale [the Canada dry type] became the predominant style, we can be quite sure, that ginger ale, not beer was used in the original recipe - which was created around 10 years after prohibition.

Fact though is, that [as much as I love ginger beer] ginger ale is working much better, as it doesn't overpower the agave aromas of the tequila.


Hence for me, it should be a good ginger ale.

Fever-Tree is good [besides of the fact, that it is a bit weak on the carbonation]. Canada Dry might be the original [since 1904] but also pretty commercial; same applies for Schweppes.

Your home-cooked ginger ale, might be the superior choice here...

P.S. please note, that I will update the post about ginger ale vs ginger beer, as I found new information. So stay tuned.