Yippee... today I received some pieces of my gear: Mr. FizzGiz sent the gear from the US to Abu Dhabi - trust me, these were tough >6 weeks and I had problems to keep patient.

Finally we have the gear - and fortunately I have ordered also a hand-pressurizer, so we can already start, without waiting for the installation of the CO2 cylinder.

The very low tech solution FizzGiz is beating the much more sophisticated systems of iSi: the soda siphon or adapted espuma siphon [they took the Twist&Sparkle from the market, as there was the risk of exploding glass bottles] or Soda Stream hands down. It is so simple and cheap [if you don't have to pay for the air freight], that it is questionable, why people are bothering to invest into a more expensive system.

When you get new gear, you wanna use it, right?
My colleague from our South East Asian restaurant Noodlebox sat with me a couple of days ago, and we discussed, that it would be a great idea, to use home made sodas - lemon grass, green tea and definitely ginger.

Due to my affinity to ginger beer, this was the first thing I wanted to try.
My bartender peeled and grated ginger. The grated ginger, we put into a clean towel and pressed the juice out.
Then we dissolved caster sugar in it - a lot - make at least a simple syrup [1:1] - but rich syrup [2:1] would be certainly better. Don't use any water - just replace the water with the ginger juice.
Add citric acid. I personally don't like to use lemon or lime juice in the mix - it will oxidize and drag the whole brightness of the soda down.
If it is very sweet and has a noticeable sour edge, you can dilute it with a lot of soda [I like to use club soda, as it already have a lot of carbonation - later on, when I will have my CO2 cylinder set up, I will use normal water, which is definitely much cheaper and better for the environment] - and you carbonize it, that it is very bubbly [the bottle supposed to be rock hard].

And this is more or less it.

This homemade ginger beer kicks ass - on one hand it is comparable with a commercial soda, that means, it doesn't taste sooooo different. However the ginger notes are not only spicy, but very aromatic and don't taste as artificial as in any ginger beers.

The first batch I gave directly to my colleague in Noodlebox [in one of the pretty swing top bottles which we purchased via IKEA].

For the second batch I had the idea to use little alcohol-free beer, to give it a bit more brewed character.
Unfortunately we have the awful Budweiser N/A, which on one hand looks great [it almost looks like the normal Budweiser, which is pretty awesome as an teetotaler beer] - but it is really pretty bad, if you compare it to other alcohol-free beers [here in the UAE we have Holsten, which is definitely one of the best N/A beers. It taste 98% like a pilsner - the other N/A beers are as bad or even worse than the Budweiser].

Still, only a little bit, incorporated a nice maltiness into the ginger beverage, which brought it from "ginger soda" to "ginger beer".

Very soon, I will make a home made ginger ale. The distinction between ginger ale and ginger beer can be confusing; ok there are two ways to distinguish between them: the historic way, which has its weaknesses and the pragmatic way, I am absolutely a fan off. Our home made ginger ale will incorporate spices, some other botanicals and some oak aging...

Here the recipe for this ginger beer.

Fine grate the ginger.
Put the grated ginger in a clean cloth and press out the juice [I am sure, that you can use the dry mass of ginger - just don't ask me for what].
Dissolve sugar and citric acid into the ginger juice [you can heat it up, if you would like to - however it will taste less spicy as well as slightly cooked].
Add beer and club soda and carbonize it.

And I don't need to tell you, what kind of delicious drinks you can do with ginger beer... 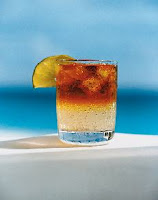 My personal favorite is a variation of the Dark n Stormy. Instead of using the admittedly great Gosling black seal, you are using Old Monk 7 years old Indian rum. This is dirt cheap in the UAE - and it is really flavorful [in a good way]. Add lime, add ginger beer, sail away. Nuff said!