March 24, 2014
So folks, a lot of time past, since I participated the last time a Mixology Monday. And honestly - even this time, I am impossible late with my contribution.

Well - rest assured, it will be an unique one!

Let's first of all get to the topic. Craig over at A World of Drinks is hosting this MxMo - please follow his explanation:


For this month’s challenge I would like to take us back to the humble beginnings of the cocktail bar, the days when bartenders didn’t have the luxury of daily deliveries of ingredients from around the world. In these times bartenders would have been uncertain when they would again have the privilege to work with special ingredients so would naturally try to make the most of them… Such methods of preservation such as syrups and preserves have been staple ingredients behind the bar ever since, while others such as shrubs and sherbets were relatively short lived. The aim of the challenge is to go back to the days of the preserve, pick an ingredient, seasonal or not and treat it as if you won’t be seeing it again for quite some time. Syrups, sorbets, jam, shrubs and the like are all fair game, anything that will preserve the integral character of your favourite ingredient.

So- here we are; thank you Craig for hosting this Mixology Monday! What a great, inventive challenge.

So what is mine? Aging clarified milk punch? Nope. Done already. What about a Breakfast Martini? Despite, that I am still questioning Calabrese's sanity to call this drink a Martini [it is not bad at all - but equally not at all a Martini]... he has mastered it. No need for tinkering it [except obviously the name].
Shrubs, gastriques or home made preserves? Well... I have to be more creative...

Ok, ok, don't pressurise me - yes, I will say it now: it is a Bloody Mary.
What? You are not impressed? Be patient and read on!

I am currently obsessed with house fermented stuff. Mostly lacto-ferments, but also some SCOBY and TIBICOS madness. Fermentation is maybe the most ancient way of preserving things and it can be found in all cultures. While kombucha and water kefir is not to bad [in fact, I plan to do something like a kombucha shrub], I had very little success with fermenting juices - OMG - I remember my lactofermented OJ - disgusting!
But some things are turning out great [e.g. apple juice=cider] - especially vegetables.
Which brings us finally to the Bloody Mary. Yeah - I know, tomatoes are basically fruits as well... but they quite work, if you are fermenting them.

Why wild fermented? Because I don't use any culture - I just trust, that enough bacterias are in the medium to jump start the fermentation [you could also add a bit whey of a yogurt with living cultures - however you will have only one [or max a couple of] specific microorganism - and I like natures surprises! 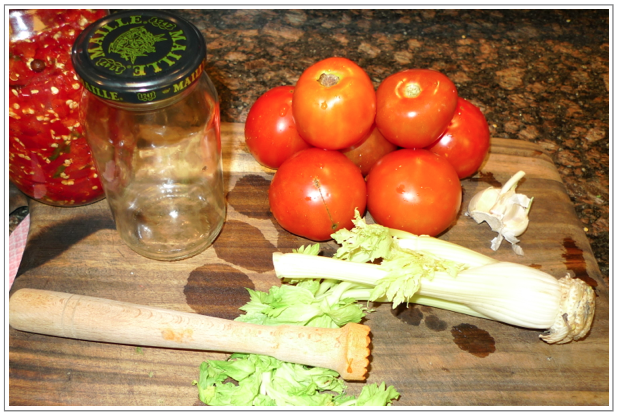 This is what you need:
Basically it is straight forward:

Look - the most delicious things are fermented: cheese, bread, beer, wine, marmite [for some of us, it is delicious], soya sauce, miso, tabasco, Worchestershire sauce, Sriracha and so on.
And your fermented Bloody, will be definitely a big contender to one of the most delicious drinks!

So - yes this is definitely a window into the past - and hopefully into the future. Fermenting the tomato mixture, certainly makes it shelf-stable. Personally I would wait until the fermentation is really more or less finished - otherwise you would have a somewhat fizzy Bloody.
And you can wait, until tomatoes are cheap and ripe. So it taste even better [except if you are living in the Middle East like me, where no fruits are really ripe, to do crazy shippings and crazy temperatures in which it is not easy to locally grow anything].

No my genius [or madness - you will decide], is my valve. No - it wasn't my idea, to build this [however the use of a balloon, is definitely mine - and you can see, that my foodsaver attachment is definitely also my very own diy solution]. You can find these valves, if you are looking for pumpnseal. But until now, I have seen only the pumpnseal valves solution in context for just vacuum seal jars. But fermentation is the next step. The genius is, that air cannot get it, but CO2 can get out [we don't really want, that you are ending up with an explosive Bloody Mary if you are using jars without valve - do we?]!
Yeah you could buy an air lock. But how many air locks [inclusive jar] do you want to buy [especially if you are planning to offer a drink like that in a commercial setting].

A word to safety: anaerobe microorganisms are usually beneficial [e.g. lacto bacteria]. They thrive and create acid, which is another environment condition, which spoilage and dangerous microorganisms don't like, but beneficial MO like even more. Obviously a normal clean environment is important - though sterilisation/pasteurisation is not at all necessary!

Adding the celery is not only tasty, but also smart, as it contains quite a lot of compounds, related to sodium nitrate, which would "kill" botulinus [the thriving of the dangerous fungus botulinus is not realistic anyway, because it would need much "more anaerobe conditions].
Adding lemon creates a slightly acidic environment, which also benefits "good" microorganisms and make it hard for "bad" microorganisms to multiply. And guess what salt is: another thing, which nice bacillus like, but the bad bugs hate - but salting should be done in moderation - cause the good bugs also don't like too salty environments [you can trust your taste buds - salt it - but don't make it "salty"].

This having said, common sense is also important. If the mixture smells foul or in any way spoiled [other than fizzy] throw it. Some hardcore fermenters are just scratching mould from their ferments. I am rather pragmatic and throw the batch, if mould grows. After few days, if you would like to use the mixture, it supposed to be quite sour [even if you are not using lemon juice]. If not, don't trust it!
But also don't be a pussy and be oversensitive. People fermented several thousand of years - probably in less hygienic environments than your kitchen. And usually ferments make things more nutritious and saver to eat/drink!

Uhoh.... how could I forget; you could "pulverise" everything [it is better to fish out whole spices out of the mixture] in a powerful blender [it makes the mixture thicker and a bit grainy] - but it is even better to use a food mill, to separate the soft and mushy matter from the harder parts. If you are doing that, you end up with some seeds, but also quite a lot of tomato and chile skin.

Don't throw this away! You will dry this [food dehydrator for those of us, who have these kinds of devices; for the rest of us an oven on the lowest possible temperature will do] and afterwards coarsely grind this [spice grinder or pestle and mortar].

This is the most amazing "rim-spice" for a Bloody [even if you are not intending to always ferment your hangover cures] - its slightly salty, nice and red, spicy, tomat'ey goodness. You could either way use it like it is, or mix it with black pepper, celery salt, table salt and or cayenne.