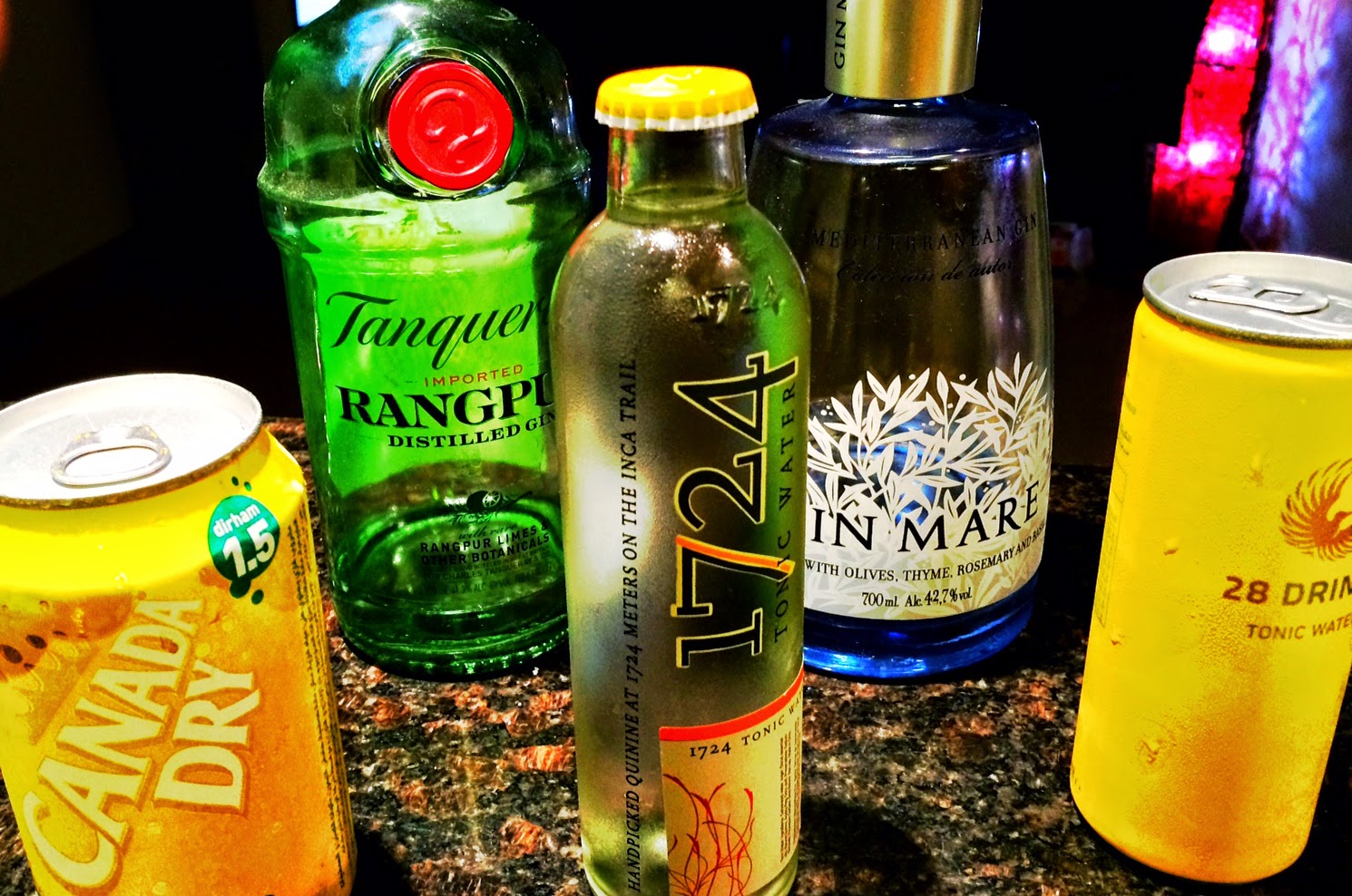 Yeah - I know - just another tonic water review??? Yes- but the friendly guys from TopShelf Beverages met me in the hotel, and left me a couple of samples - one was 1724 [which was basically why we met].
Anyway... previously I have reviewed the Fentiman's here and here - the outcome was, that it was different - lemongrass'y.
Then I have reviewed East Imperial here. Oh wow - this was even more different. The friendly guys at East Imperial also contacted me, and informed me, that a bold, but more conservative [speak sweet-sour] variant is coming soon. Looking forward to it! But again - East imperial was different - root'y and very unique, indeed.

And now we have got 1724. I spare you again the story. I am not working for the marketing department of any soft drink firm - and I guess, they can do best, to explain the origin, story and other marketing b.s. [no offence!]. You can find it here. And again - 1724 is since a quite short time available in Dubai - whoopee!

So let's start, shall we?

Bottle:
Good tonic waters tend to come in small bottles. Sometimes they are too small; sometimes they are just right. 1724 comes in a beautiful 200 ml bottle. Even the bottle itself is very stylish! 200 ml is slightly more, than a "serious" Gin & Tonic drinker would need for a double shot gin. Very good [while some might say, it is slightly wasteful].

Just the Tonic:
Compared with the two very unique tonics, I have reviewed previously, this is much more conservative. The carbonation is medium - but much better than e.g. Fevertree. I get some dishwasher lemon oils [that is not negative - I quite enjoy it]. In fact the smell reminds me on sodas, which were sold in the GDR when I was young, and my parents visited "East-Germany". These sodas were not exactly my taste. However the "funk" in the 1724 doesn't go so far. It makes it again: different.

Gin & Tonic - GinMare:
1724 comes pretty much in "tandem" with GinMare. The first time, I have heard about it, was from the representative of GinMare - thanks Carlos!
So how does it fare? I poured 1.5 shots [which is 45 ml] into a glass - added a lime [but didn't  squeeze it first]... Without squeezed lime, it is almost not acidic enough [but not at all as restrained as the East Imperial]. It let's the gin shine, without being submissive. Not bad.
With lime, things are going somewhere. A bit of the uniqueness is hidden by the additional citrus flavours, but still - a nice combination. But still very unique and funky - not everybody's cup of tea.

Gin & Tonic - Tanqueray Rangpur:
Wow - a distant whiff already reveals that the citrus becomes crazy... This time I reduced the measures to one shot [30 ml] - a tedious work week and a gin & tonic review doesn't fare well together...
Anyway - the smell is amazing - obvious limey - almost too offensive. The taste? Lime on lime on lime. Let's call it bitter lime. A bit like lime flavoured dishwasher [just a disclosure - no I don't taste dishwasher - but I smell at it and could imagine how it taste...].  Is squeezing a lime into it a bad idea? Yeah it is! It becomes even more limey.
This combination would be interesting if you prepare an avantgarde G&T with some other ingredients [than lime] - grapefruit maybe... orange, or some fruits like raspberries? Or cucumber.

Gin & Tonic - Diplomat Gin infused and aged with rhubarb:
I guess, I had enough gin & tonic for today... But the lime attack of the last experiment just reminded me, that I have a ziplock bag with the remaining of rhubarb infused gin... A friend and me finished the bottle before [and were surprised, that it was really improving with age] - but there was still the gin infused rhubarb... which I kept out of no specific reason. Fortunately I did - as the rhubarb "bled" gin, which I can try now...
...and wow - now the 1724 totally changed face. Really the G&T is now so nuanced, still bold, but extremely complex... really cool. It doesn't taste particularly like rhubarb. Just like a G&T made by Heston Blumenthal... or better: me [hahaha]. - Squeezing lime has a negative effect and again puts the citrus aromas in foreground - and the complexity is lost.

What do I think:
1724 is quite a pleasant surprise. It might be not a tonic water for a very citrussy gin [Tanqueray Rangpur is just the extreme in this case - the mixture is definitely still drinkable - but also quite one dimensional]. Surprisingly it also doesn't show its full potential with GinMare. Honestly I believe, that GinMare is made so unique, that it is better with an even more conservative soda [speak Schweppes or Canada Dry]. It became much better, by squeezing lime - but this maybe, because GinMare is very savory and has not much citrus affinity.
But with an infused gin, it really starts to dance. I would look forward to try it with some blueberry infused gin, or similar experiments.

Verdict:
Drinking 3 G&T when you are already tired, doesn't bring you anywhere...

Now the serious verdict:
1724 is a worth addition in the tonic landscape. And honestly - I would really like to see, when the guys from Fentiman's, East Imperial and 1724 would come together and would celebrate the Gin & Tonic [or Tequila & Tonic, or... you name it] - I think it is important to showcase people, different characters of tonics and how they are working with different gins...
1724 is in the middle between extreme & artisanal tonic and commercial tonic - and this position is a great one. It won't alienate guests, who aren't inaugurated into the "secret artisan G&T society" - but also offers enough difference to commercial sodas. It will definitely a worthy addition to some of the menu in the hotel I am working....

The verdict of the last 3 tonics:
The only regret I do have is, that I don't have enough tonic water of all three to taste them all in one test.... and yeah - I also [currently!] have not the stamina!

The real feat here is, that all three tonic waters are really nice, tick different tastes and work with different gins! I believe, that G&T is a drink, which has enough mass appeal, to give the opportunity to offer in a venue different alternatives of tonic water - not only of gins. And exactly this I will do.
Other than Fevertree, which is just a nicely bottled and designed taste of a flat commercial tonics [sorry] all three tested tonics are really standing out - and make sense to be featured.

Which gin's for which tonics? Well you might stay tuned and visit this place, to find out in which bars I will introduce these different tonics, and what the suggested pairings will be.

Until then, please let me know, if you have your own experience with 1724 or any of the other tonics!

Yeah I made the picture of Canada dry tonic and 28 Drinks tonic- as I wanted to make a taste comparison. However as I am a quite reasonable person [at least most of the time] I realised  that I won't be able to do that... not unharmed. So I will keep my review of the more commercial sodas for a later point.