September 18, 2014
There are things, which boggles me - basically these are first world problems, however it is annoying, that these problems are not solved [yet].

In the bar there are some points, which rob my sleep, when I think too much about it - but basically nobody seems to care:

I have had a short discussion with Jeffrey Morgenthaler on his website [via comments] - but he didn't cared about this small hints, and just suggested to use citrus twists to hide the effect - I didn't agreed - it is a bit more bearable with the twist - but definitely not at a level, which isn't recognizable [think about spraying some deodorant over your wet dog - this actually does work as good as the lemon twist technique].

Toni Conigliaro communicated, that you can avoid the bad smell, if you are having the eggs in a box and add hydrosols [like rose or orange water] - hint: it doesn't work really.

Jamie Boudreau, who based his espumas on egg white [the wet dog becomes even bigger then] - also didn't had any real solution.

I asked Darcy O'Neil, he was curious - but until now he owns me an explanation, why this oxidative smell is anyway happening.

I almost gave up.
Basically the smell is only really mentioned by ca. 10% of your guests. Out of 10 people, who indicated this "problem", 1 person will refuse to consume the drink!
And yes - I also recognize the smell - and basically either way down the drink very fast [within the first minute] or sip the drink, only breathing through the mouth!

The possible solution, wasn't one "eureka" moment, but came in little steps.
First off all I found this video about sous vide meringue - something which is basically destined for the bar:

I tried it. Other than the dude in the video, I also fine strained the egg white [always fine strain, when using a cream whipper] - and only 2 nitro chargers were needed for a 1 liter "bottle".

And... it worked. And it worked even better than in the video, creating a sweet, luscious, dense foam. As the instructions I used 1:1 sugar to egg white - but I also added one teaspoon of rose water [not because of the smell of egg whites, but because of the cocktail, which follows below].

There is not even the slightest hint of wet dog smell!
Seems that not only fat [if you combine egg white with any fat, the smell also seems to disappear - but also the magical foaming doesn't work as good] - but it seems that also heat, is killing this annoyance.

The foam was so impressive, that my next idea was, to use it directly for cocktails. Now I have to sous vide another batch - however this time with less [or without] sugar, and hope for the best. My guess is, that it will be the solution for problem of sleepless nights.

It would be also practical - having egg white in the cream whipper, is a very hygienic solution [except maybe the nozzle] - and you probably don't need to dry shake either...

Stay tuned to see if it works... but I would be delighted to see my readers to try this technique out and post, if it works - just remember: please mention, where you have seen this technique the first [hint: opinionated-alchemist.blogspot.com !]. 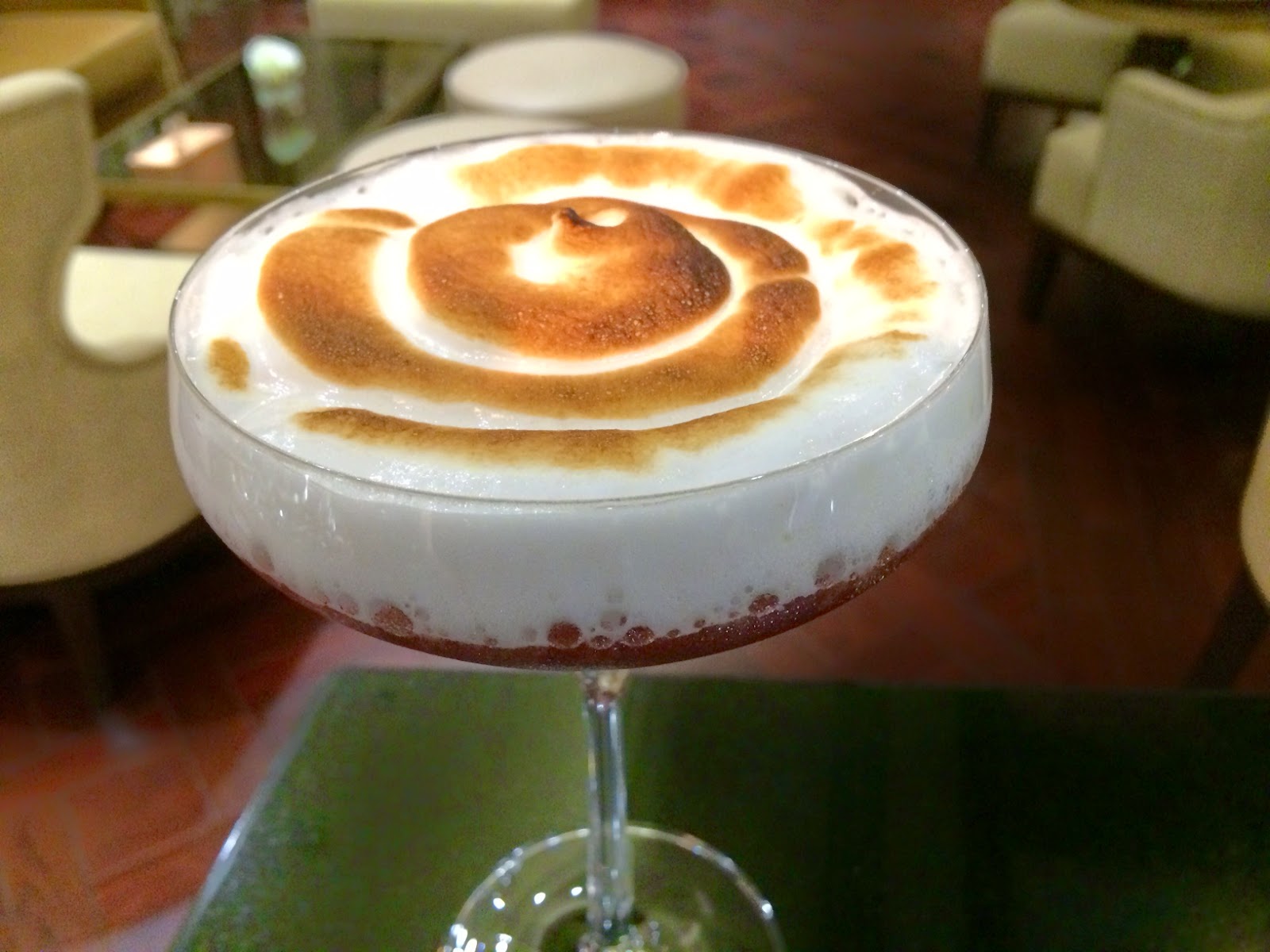 Confession of a Thug

Shake your "clover club" - pour it into the glass. Add the foam via cream whipper.
Use a torch and fire at will [but you want to have it toasted not burned].

In the background is our beautiful new Library Bar - which just soft opened. There is definitely much more things to do here...

The cocktail is undeniable a clover club - though the foam is sweet and dense and beautiful and fragrant and rich. The Darbo raspberry syrup just adds so much depth to the drink - I am usually a big fan of making homemade stuff - but this product rocks - definitely a product to look out for [strangely Darbo is considering their syrups as off trade - and while they are not as convenient than bigger producers - as they have to be chilled after opened, they are definitely the most natural and just tastiest commercial syrups, which I ever tasted].

It is also the first time, that I've managed to successfully "brulee" a cocktail, with adequate results.

Please comment below: what are your experiences with egg white?
Would you consider to try this method out?
Results?