September 16, 2014
To all of my regular readers - please apologies for my long silence. I am very busy at this point on work - regularly I had to sacrifice my days off, for the moment I am even sacrificing a lot of my spare time.

A couple of months ago, I have bought a Büchner funnel and a vacuum pump. I tried it directly, but the filtration didn't really work well.

Momentarily I am reopening our hotel bar [yes, it will be good] - but also the hotel lobby lounge - hence I've just did a couple of things. So I did [in my home "lab" / kitchen], Thai spiced syrup [for the lounge's cha yen], cinnamon infused vodka [for a housecrafted blend of bitters] and tarragon syrup.

Tarragon syrup
This took the longest way...
The syrup first of all looks very cloudy. But after one hour the syrup cleared up - and while the syrup isn't brilliant, it is almost so.

Thai Cha Yen syrup
This is basically a different route, to streamline the production of different iced teas in "our" lobby lounge. Thai iced tea is usually made with steeping vanilla, star anise and other spices in black tea. However you would need to make this preparation daily and you might not need it all - a huge waste.
Instead of putting the spices in the tea, I made a spiced syrup, which taste basically the same, however is shelf-stable for at least 2 or 3 weeks.
Cinnamon essence
This was the most surprising. I used 2 different cinnamon types - one which is very common here in the Middle East - a hard bark [you could call it cassia]... the other with brittle multiple layers of 'wooden spice' - call it true Ceylon cinnamon. I also used Smirnoff blue - not because I am so convinced of the brand [duh], but because it has 50% alcohol - the highest alcoholic content of neutral alcohol - in the UAE.
These were just three examples, for the use of a very advanced filtration system. 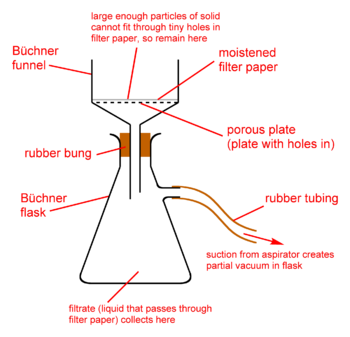 The Büchner filtration system, consist of 3 main components - the funnel [inclusive filter paper, and seal], the flask and the pump [including tubing].

Very important is, to moisten the filter paper! I tried it before with dry paper, and it simply didn't work. For the cinnamon infusion, I didn't wanted to use water, so I moistened the paper with vodka.
When I got the Filtration system [Büchner funnel, filtration papers, flask, hose and the hand vacuum pump] I tried it out and after a couple of pumps, the plastic pump was breaking. Bummer!
However I was smart enough to order a metal pump as well, which works like a charm.

What you can learn of this experience: don't trust in the flimsy vacuum pump, they add to the bundle. You need a proper pump made out of metal. I never tried an aspirator water pump, which seems so much easier [and not more expensive] than a hand pump - but it is definitely not environmental friendly, as you have to keep water running to use it...

I also had the romantic idea upfront, that the liquid, which is filtrated through the system will be ready in minutes. If there are fine solids in the liquid, think more about an hour or two, until you have filtered one liter or so. Still, it works so much better and faster as using a coffee filter [some infusions will take days or weeks]. However it is not advisable to filter syrups or anything with sugar - as it won't properly work. First do the liquid without sugar [or honey, maple syrup etc], after filtering, just add the sugar as last step.