The best horseneck I have ever tasted 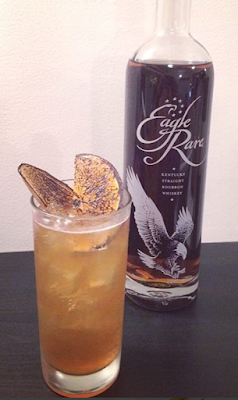 I have never really made a secret out of it: I think that complicated cocktails, with loads of ingredients are simply unnecessary... even foolish at times.

I do believe in classic (and new classic) drinks - made on the highest level possible.

A lot of bartenders though don't really understand fully the concept - there is a lot of perception and much less real knowledge (and taste) in the bartending world. Take for example the humble horseneck. If you would ask a group of bartender to make a premium version of it, most would use a great bourbon, Angostura bitters & a commercial ginger ale and call it a day. There I do agree with those who say, that using premium spirits is a waste in mixed drinks.
There are others which would use the premium spirit, would though use a premium mixer, Angostura (or fancier bitters), and also feel confident to have done good work.

But here is the thing: often "premium" mixers are more or less the same as commercial mixers. Yes, they are probably produced in smaller batches, yes they might use sugar instead of HFCS, but lets face it, most premium mixers taste the same (or often even worse - yes I look at you Q Ginger) than volume brands... hence you increased the cost of the drink, but not really the value (except of these fancy bottles).

Then there will be bartenders, which like to complicate things, muddling fresh ginger, shaking it along with simple syrup, lemon or lime, and whiskey and adding club soda to it. I actually like these thought process - when it comes to premiumisation. But there are two culprits: often in service these drinks take an awful long time to make (given, that a highball should help to improve efficiency) - but even worse, the taste might be really nice, but the character moved too far away of being... a horseneck. 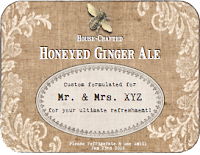 The solution is: making your own ginger ale!
I have to admit, the starting point was not the attempt to make a horseneck. At the hotel, we have at times VIP's which are spoiled with a personalised beverage amenity. As this amenity was for a family (with grown up, but not yet adult children), I thought, the best way is, to make an adult version of a ginger ale.

I used a lot (maybe too much) ginger - and made also quite a lot of ginger ale - enough to give several colleagues on work a taste, but there was also enough to make a second batch with the same ginger.
Then it was just few tasks like sweetening and acidifying the infusion correctly and obviously carbonate the whole shebang!

To put the Horseneck together was pretty easy - using ice cubes without surface water (but the ginger ale was concentrated enough, to also deal with some "wetter" ice cubes), a couple of drops of Angostura Bitters (no fancy bitters at home), and a good glug of Eagle Rare Bourbon (why Eagle Rare? Because I had it in my vitrine, and I just had it on the rocks and neat, but was dying to try it in a drink).

This is a really amazing drink! Truth has to be told, the ginger ale wasn't a normal ginger ale; it was sweetened with honey (I used only sugar to get a nice caramel, to support the typical candy flavour as well as giving it the typical light amber colour) - but also spiced not only with fresh ginger, but also orange peel, cinnamon, Tasmanian black pepper, few celery seeds, allspice and vanilla pod.

The finish with the burned ginger (just a cool garnish) and burned orange slice (which gives additional flavour), was just a worthy and in comparison simple garnish...

Add into a dry pot the sugar and heat it on medium heat, until the sugar slowly melts and slightly browns. When the sugar turns hazelnut brown add sliced fresh ginger and spices.
Add about 200 ml of water and simmer for about 1 hour or more - stir to completely dissolve the caramel. Add more water if necessary to prevent it from burning!

Strain the liquid and add citric acid and dissolve it. Wait until it lower than 60ºC and add honey and dissolve.  Cool down.

Add the "syrup" into a carbonation device and add plain filtered water and few ice cubes (enough to chill it as cold as possible but fully melt). Carbonate. Fill into a fancy or not so fancy bottle, label, keep refrigerated and use within 3 days or so!

Ginger and honey are pretty much the produce with the most active cultures (yeast and lacto-bacteria) inside, and even the rather high acidity (through the citric acid and carbonic acid), won't prevent it to start its very own fermentation. The ginger ale won't be ruined then, but it taste rather fermented, which might be liked by some, but not by others.
I usually like the cleaner taste of non-fermented ginger ale, so I try to finish the bottle as soon as it gets. However you could freeze the syrup (use a ziplock or vacuum bag) and keep it for longer than 6 months in the freezer....