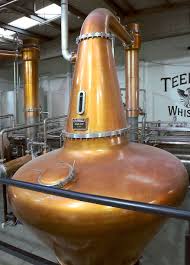 So I went over my feeds on feedly, which are obviously quite beverage heavy - and an article off Bevvy caught my eyes: Best Irish Whiskey under $50.

Well - there hasn’t been any news for me (well - it is an average selection - though with mentionably a deserved first place: Red Breast 12 years old) - however in the descriptions, several issues (read: mistakes) caught my attention.

I don’t want to call Bevvy.com out here - however I thought, it would make sense, to repeat the respective categories of Irish whiskey and explain a bit!?


So here we are - the “ultimate” Irish Whiskey Style Guide:

Irish blended whiskey is almost the same as Scotch blended whisky - with 2 differences: a) there is an ‘e’ in the whiskey, and b) one more category of whiskey is allowed in the BLEND:
While Irish Blended Whiskey hasn’t been the original (authentic?) Irish whiskey, it is now the biggest category - if you think about big brands (independently if cheap or expensive) - they are mostly Irish blends: Jameson, Tullamore Dew, Black Bush, Midleton - all blends.
You need a further explanation of the components? I got your cover - just read on - I will explain every one of them. Why is the “single” in brackets? Well, in a blend, the producers are using different malt whiskeys - and as they are using barrels, each and every of these malts are single malts (because each barrel comes from one single distillery) - but obviously they neither “stay” single, nor malts (as you are blending them in a blend, DUH.

Irish single malts are following exactly the same laws as Scotch single malts - but have a bit of a different character. The law states that:
Often Irish pot stills are far bigger than Scottish stills. The malt is also rarely peated, that means, Irish whiskey rarely features smoky notes. Last but not least (as already mentioned) a lot of malts are distilled thrice, which make a malt slightly lighter. But the last point, isn’t anymore that representative.
I am not the biggest fan of most Irish Single Malt Whiskeys. Some are good, but the normal ones aren’t that great (IMHO - especially the big brand). But you cannot argue about taste - can you?

Again - this whiskey is equivalent to their Scottish cousin. It is quite easy to understand - Irish Blended Malt is the “missing link” between Irish Single Malt and Irish Blended Whiskey - it is a blended whiskey, however the components can only be made out of Irish Single Malt Whiskey (barrels) - and water. There is nothing more to it.

Grain whiskey is basically the vodka of the whisk(e)y market. This is what applies for grain whiskey:

This is probably the most iconoclastic Irish whiskey around. This is the authentic Irish way, and if you ask me, the Irish should push far more for this category (I believe, that uniqueness sells). Following the major points of Irish Pot Still:
Basically Irish Pot Still Whiskey and Irish Single Malts are very similar - the only difference is, that also unmalted barley is used. However the differences in character are quite significant. Obviously pot still distillation is expensive and barley is also far more expensive as cheaper grains like corn - but the resulting whiskeys are very unique and I really like them. While most Irish malt whiskeys seem to be just malts from another country, which tries to hijack the malt trend, Irish pot still whiskeys are truly unique.

For the pricing of Irish whiskey - I really don’t understand, why brands like Jameson, are sold at a premium (at least in Dubai). For the same price of a normal Irish blend you can have already a deluxe  Scotch - or a pretty good rum, etc. However I have no problem to shell out far more money for Pot Still Whiskey - I love Red Breast, which is one of the greatest (and not that expensive) - but I love to try also other brands (which are currently not available in Dubai).

That’s about it. It isn’t really difficult, you just need to know, the respective basics.