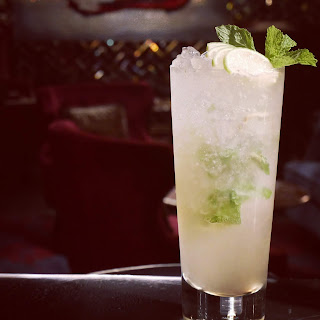 I am often really annoyed when I see people, making cocktails (blogging about cocktails, etc.).

The Mojito is one drink, which gets molested all the time. And people don’t get it: there are drinks, which were consumed in a civilized environment (bars) - by more or less civilized people (at least they are civilized in the setting). And there are peasant drinks. A peasant drink can be great - I don’t judge, which drink is better - but latter is far more adaptable to changes.
Comparing the Mojito versus the Caipirinha is pretty obvious: the Mojito is a bar drink. Very soon after its creation, it has been consumed in Cuba’s most recognized bars - probably by the most famous people at its time.
Against that, the Caipirinha has been a drink of farmers and workers in Brazil.

The difference is a pretty big deal - at least for me.

Hence you can be far more liberal with your creativity (if you really need to call it like that) with a low key drink, as you should be for a classic...

I don’t mean, that you can’t make a drink with slightly muddled mint, using a Demerara rich syrup and a couple of dashes of bitters. The only objection I do have is calling it a Mojito. In fact it might be just a swizzle.