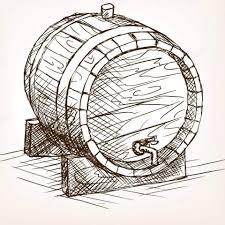 The older I become, the more I see opportunities to do some really significant (and new stuff) without using arsenic in cocktails and poison people (or like a trend a couple of years ago, make tobacco infusions, which are basically more poisonous than arsenic - as nicotine is quite a bit more poisonous...). Off course I am kidding - however you don't need to mix Bourbon with Mountain Dew to do something really exciting...

In the place I have worked before we did a barrel aged Last Word. This was actually a great idea - the cocktail was pretty awesome. But as we used a very small oak vessel, the oak was quickly exhausted and we tried to age Glenmorangie in it (Last Word finished Glenmorangie 10 years old). It was a success - not for everyone (especially the Chartreuse gave the whisky a hint of funk, which isn't often experienced) - but it was subtle enough and I loved how different yet recognizable (Glenmorangie) it has been

Now we are aging Negroni (thanks to the original Jeffrey Morgenthaler method...) and an Rye Old Fashioned in 10l barrels.

As we have quite a lot of Glenfiddich 12 years laying around (and I am quite a fan of the 15 years old Solera expression, but always found the 12 years old a bit... boring) - I thought why not aging it in the oak barrel?

The cool thing is, that 10l barrels will have a much subtler influence as previously the far smaller vessel (it was actually a oak bottle). Also: Our Old Fashioned consist of sugar (not different of cream sherry, port or madeira barrels), some faint orange twist notes & rye whiskey - which is in my eyes very cool (as Rye Whiskey is still rather small, there are only few barrels, which are used with Rye - which are noticeable different from their Bourbon bros...

So how is the Glenfiddich gonna taste? No idea. Probably you have to come to Noir and have to try. I thought to start with 70 dhs and charge for every week 2 dhs more? Comment, how you would price it...