March 16, 2020
We are living in a time, in which soft drinks are in steep decline, as scientists learn more and more about the harmful effects of the over-dose of sugar. 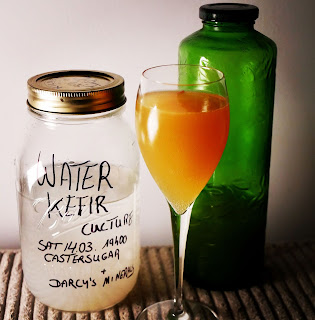 While I am a big fan of drinks like coke (soon, there will be a review of the new Coke mixers yay!), I am also aware, that these beverages are detrimental - not so much due to the sugar for one drink, but for our habit to drink far too much of it instead of water (people who know me, will point now a finger in my direction).
Now people are very quick of pointing out, that juices are an alternative. They are not!
Most juices (even if these are juices and not nectars and juice cocktails / beverages, which do not even have 100% juice content) are (almost?) as bad as sodas. They contain pretty much the same amount of sugar - which is the main culprit here!

People would argue, that it is healthy to eat an apple - how can it be unhealthy to drink the juice of an apple? Well - it is not that difficult to answer:

1) First it is the quantity - you might eat one apple as snack between the meals. But a glass of juice doesn't contain one apple - but rather 3 or 4. Hence it is again a matter of quantity (of sugar).

2) Eating an apple include the fibres which are essential for the gut health - in besides of the (unprocessed) vitamins so important. In juice you will have much less of the nutrients but non of the fibres!

There is only one thing which is really healthy: drinking water.

But there are cultured beverages as well. Water kefir is one of them. You cannot drink too much of them (and expect that this is healthy), but for sure, this is healthier than commercial sodas as well as juices.

What is Water Kefir?
There are so many websites out there (this one for example), which you can check out, what water kefir is. But in short: It is a lactofermented beverages derived from sweetened water - it is similar to "normal" kefir - however while "milk kefir" is fermenting lactose, water kefir is fermenting sucrose.

The culture is a symbiotic culture of bacteria and yeast, which ferments most of the sugar into other compounds, like carbon dioxide (it gets fizzy) and acids.

As Water Kefir is fermented, does it contain alcohol?
Very, very little. Not more than you do your own sauerkraut or other pickles. But it depends on several factors (temperature, pH of the water, time, other nutrients in the water etc.). Definitely less than if you keep your apple juice at room temperature open over night (or a couple of days in the fridge - yes, juices ferment like crazy even without the introduction of commercial yeast).

How to make it:
You need the culture first. This you can buy online e.g. over Amazon. You have first of all to prime your tibicos (hydrate, activate) in sugar water. After a couple of times (usually water kefir ferments between 12-48h) the culture will produce nice fizzy water kefir

Most advisable are two cycles of fermentation:

The nuisance is. that you have to change every 1-2 days the sugar water of your kefir. It is far less easy going as kombucha (yeah - we will talk about kombucha in a future post). On the other hand, it taste far milder.

Talking about taste:
The first time I tried the fermentation of water kefir I was pretty disappointed - or let's put it more straight forward: disgusted! I could not get over the taste - while Kombucha is strong in taste and funky, water kefir has this faint taste, which isn't for me. But the taste I disliked as much was not the ferment itself, it was the aromas which the "natural" sugars (molasses, brown sugar) gave to the kefir.

My first purchased water kefir grains died in vain... but when I ordered a couple of weeks ago a new set of grains, I had an idea. During my research I understood, that people are adding the more natural sugars, because tibicos likes minerals and mineral rich water. When Darcy O'Neil visited me from Canada in Dubai for a masterclass, he brought a mineral salt "complex" - with which you could do your own mineral water.
So I used it for the water kefir: and had success! Only a pinch of the minerals dissolved in water and simple caster sugar, not only kept the tibicos alive, but put it also in "hyperdrive" - the grains become defined and strong - and multiply nicely (so they are healthy) - but more importantly: the cultured beverage taste far better - has only a bit of fermentation "funk" in it.

The day before yesterday I used in a second attempt some peach nectar I still had - and the second fermentation worked great. The carbonation was not really strong (I could easily left it for longer to ferment) - but the taste was great - less sugary than the nectar itself - and the funk has been covered by the peachiness. Nice.

For the first batch I used some quartered lime (I used some of the skin for cooking). While it was nice (the lime gave it a bit more funkiness), it was also very bitter - most probably due to the pith. Which would raise the question: would this be a great substitute for tonic?

There is more testing to do. My culture is alive and thrives, so I will do some further testing. And I will definitely write up some interesting recipes.

If you are living in Dubai, I am also more than happy to share some of the grains for people who are interested?