Paradigm Shifts in the Bar 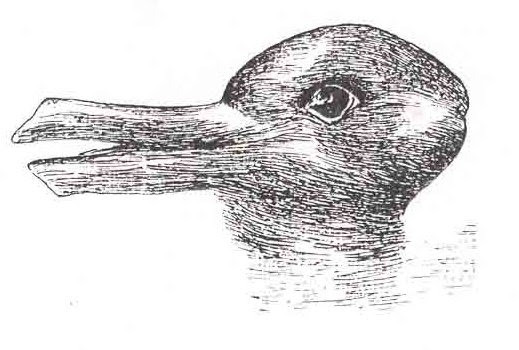 Not long ago, there was a post about the Singapore Sling on Facebook, and I commented on it.


Point is, that it is unlikely - or better said, close to impossible, that the contemporary recipe [which is said to be the original recipe] was invented in the 1920's.
Ok - let's first of all see the recipe:

David Wondrich, one of my favourite cocktail historians discussed the Singapore Sling here.
And I do agree. I like his research, which showed the unlikeliness, that no cherry eau de vie was used - rather than Bols cherry liqueur or Cherry Heering. It seems unlikely, that a drink haven't changed at all for 20 years and thousands of miles.

But what is about Grenadine? And the pineapple juice? And the Cointreau? David Wondrich is not even mentioning it...

Let us come now to the paradigm shift in mixology. You can see above the picture which seems to be a duck - but if watched from a different perspective changes to be a rabbit [however the duck "never can be unseen"].

I don't want to set "mixology" here on the same level as science. However we do understand rules in mixology, and depending on the time, there are a different set of rules - and it seems that there are "shifts" which leads to new liberties but at times also new limits.

The last big paradigm shift in mixology was the renaissance of mixology in the very late 1990 to the early 2000's. You might have heard of it, in case you don't drink some Sex on the Beaches, Alabama Slammers or Blue Kamikaze [and if you do, please do leave my blog immediately!].
PThis is work in progress - but I could make out some [not all] specific points of paradigm shifts:
Align to these paradigm shifts are inventions and popularisations of products as well, which made the "new breed" of drinks even possible - but at times, other products went out of favour. For example grenadine wasn't used before prohibition and didn't gained traction before WW2 - raspberry syrup was used before - however with the popularisation of grenadine, raspberry syrup lost ground in mixology.
Another detail is technique: e.g. before prohibition, different sweeteners weren't mixed [hence the use of a sweetening liqueur like Cointreau and Cherry Heering, along with grenadine is highly unlikely].

At the example of the Singapore sling, it seems impossible in these times [the mid 1920's] that someone have been so outrageous to mix a drink with pineapple juice. Also the thee sweetening syrups would be very unlikely - and last but not least a drink with 8 ingredients is also unlikely for its time.
The Raffle's was at this time a classic (colonial) hotel with a lot of cultivated expats - a drink like that would have been an insult for "contemporary" traditions.

What we can say is, that the recipe is FAKE!