So I am late again. For cocktail sake - do I really need to set a reminder, for every single month, that I 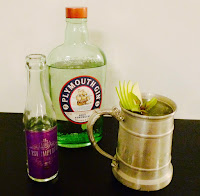 am not "oversleeping it"?
Fortunately we are in the Middle East, which are few hours before the US... at least.


First things first:the topic comes from Dagreb of the Nihil Utopia blog and this is his shortened announcement:


My theme this time is overproof. Or rather how you utilize overproofs.  Do you sub them into your standards? Save them for accents in particular recipes? Pour them into ceramic volcanoes and set them on fire? Reserve them only for making liqueurs? Whatever it be I’m looking for your recipes that use overproofs as a base or as modifier in a noticeable -WAIT- “What’s an overproof,” you ask? “Well, uh, yeah…” First let’s decide what is proof. It’s my party so I say 50% abv is proof. Above that is overproof. You disagree? Host your own party! (No really host a MxMo, it’ll be fun.) So BIB [100 proof Barreled in Bond] liquors are exempt this month but lots of bottles are fair game! Whether it boldly proclaims its strength on the label or nonchalantly lets you discover its strength for yourself use that bottle that packs a punch in a drink this month.


Now I like high-proof spirits. In fact I do believe, that one quality sign of a distillate is the strength - well at least, if it is a liquor, you wanna mix.
Overproof spirits however a slightly more tricky. You have to have a quite careful hand, to ensure, that you don't have an undrinkable strong concoction. And the high strength usually doesn't give a lot of advantages.

But let us distinguish what is overproof? I don't really believe, that overproof is anythign above 50%. A single malt or bourbon at cask / barrel strength is usually not called overproof.

It is rather the spirits, which are unusual to have at a much higher proof. Think about Navy Rums, Gins and well overproof rums.

As this is out of the way, let's think about a drink. Oh - let's think about my favorite spirit for the moment: Plymouth Navy Strength.
Don't come now with your "flavor profile". It is gin, a good one, and it is on freaking 58% abv (which is the same as 96 proof). And as like a great Gin & Tonic, it will be the base of it...
Next: the tonic... Yes - I won't give you a normal Plymouth Navy Gin & Tonic... that would be lazy (yet delicious) - but we are talking here about Mixology Monday, don't we?
So - as we are using more than only: Gin. Tonic. - we have to look for a tonic, which isn't excessively sweet, nor too sour. East Imperial comes here handy. As I mentioned before the tonic is made with "mixology" in mind.
Further component sweetness andsourness - as it is spring (well the the temperature in Dubai suggest summer) I love to have something crisp and fresh- so instead of using  sugar or honey, I like to use apple juice - we make a freeze fractionation apple syrup... and instead of lemon or lime the natural tartness is fortified by isolated malic acid (which is the dominant acid in green apples).

On the home stretch... but an Green Apple Gin & Tonic isn't really floating my boat... there is a need for another ingredient: a bit saline solution, which incorporates and counteracts a bit the bitterness... and something herbal... Mint? To obvious... what do you think about Basil? Yes... basil it is.

No here we go... a Plymouth Navy Strength Green Apple & Basil G&T... that would be a mouthful... 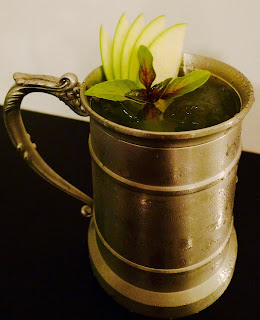 Add the basil leaves to the shaker, muddle, if you don't trust your shake-strength. Add all other ingredients except of tonic water. You can dissolve the malic acid before in the apple juice, if you want.
Fine strain all into a highball glass and fill up with East Imperial Tonic Water.
Garnish with a small basil sprig and an apple fan.
Crazy. Sexy. Cool.