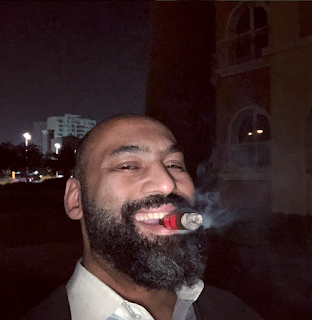 It has been a while, since I have had a cigar. It has been even a longer time that I had a cigar I have never had - or a cigar which I have reviewed.

I don’t need to repeat here the marketing story of Camacho. You can read it here.
If you are too lazy (or resistant to marketing stuff), the important info is: it is a puro - the cigar is made out of 100% Honduras tobacco. It is a long filler. It is made 100% out of corojo tobacco.

Corojo tobacco you might ask? Well, the tobacco is made out of Cuban seed - however this hybrid produces rather wrapper (and binder) tobacco. However in this cigar, it is used to make the full cigar.

You don’t get it yet? Well, in a coffee comparison, corojo is basically Arabica coffee - while criollo tobacco is like Robusta coffee.

The question is - how is it?

There are a ton of cigar reviews, which praises the Camacho Corojo (I had the Robusto today).
Yes - the vitola / banderole is big and quite unsubtle. I would say, it is a matter of taste - I really don’t care about the packaging a lot (well - except when it comes to Arturo Fuente Opus X, which have just amazing - amazing banderoles).

The taste - it is solid - but I wouldn’t give it the credit, so many smokers are giving it.
Don’t get me wrong here - it is a good, earthy smoke; from the beginning to almost the end (it becomes a bit aggressive and “coughy” at the end - but this is normal for so many cigars.

I don’t get too much into the aromas - yeah you get some pepper spiciness and some earthy aromas. Again - aromas are quite subjective.
But my overall impression is: it seems to taste like a great value cigar... - again; what do I mean with that??
Think about cars: it is analogue to a (Hyundai) Genesis. Overall a great car for the money. It has a stance, it looks quite good. It is good value for money - but if you compare it to the “big dawgs” like a Mercedes S class or a BMW 7 series, it just lacks some real excellence.  The problem (at least here in the UAE) is, that it isn’t really value. I bought it for shy under AED 100 (which would be around $27), and you could get a pretty good Habanos for the same price. I would rather buy a Partagas (Series D No. 4) or a smoother and easier to smoke Montecristo Edmundo instead of this Honduras cigar. It seems like an interpretation of a Cuban cigar. Not a carbon copy, but an inspiration to Cuba.

If I would like to buy a box to age it, again I would go with a Cuban, instead of this Camacho.

I am not so sure, if Davidoff did Camacho a favor, in redesigning and especially “reconcepting and reformulating” their line up. Before I had the feeling, that there were really cool and unique Camachos around, some very cool oddballs but overall very smoke’able cigars which were basically stood apart. Now I feel, that Davidoff, set Camacho apart, to not interfere towards their “original house-brands”. And while smoking it without context is great, it seems for the seasoned cigar smoker almost as a forgettable stodgy.

I will for sure smoke other Camacho cigars - maybe they have something more unique and outstanding. But sometimes being good, is not enough - and, as mentioned in this market, it is for sure not a superior option.
Here in Dubai (or the UAE) it is a tourist cigar. It is easier available (as the company has their shops in the shopping malls, which are far easier to access as the “La Casa del Habanos”.

What also has to be said: I think, the cigar could have used more humidity. It had a fantastic draw (I am though more a connoisseur, who likes tighter draws, when the cigar is well made and especially for strong cigars) - but the aromas could have been a bit smoother and deeper, when the cigar would have stored at about 75-80% humidity (I estimate, that it has been around the mid 60s).