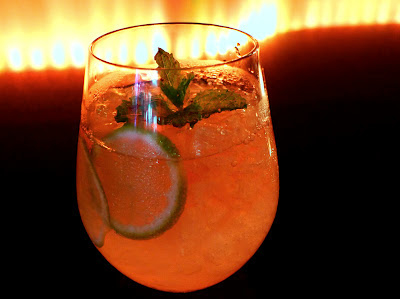 I think Highballs are awesome. They really are!

In a busy bar, it takes no time to prepare them. And with a bit discipline and imagination, they are divine and contemporary.

However you might not experience greatness, if you are using your customarily commercial canned soda. I don't want to heat up another discussion about HFCS - but lets put it this way: while "better" cuisine should avoid MSG as additive, good bars should really avoid HFCS. Nuff said.

And it is not only the sweeteners [I am usually reading horrified the ingredients lists of commercial products, only to find out, that they are using several sweeteners like HFCS and aspartame] - but also artificial colors, artificial and natural identical [means still artificial] aromas and preservatives.
While the health effects of this chemical odyssey is controversial, the culinary aspect is quite clear:
these products are crap!

And making your own soda is so simple.

Now I have trained J.P. my current bartender [oh - well, you can congratulate him to his promotion as bar-teamleader] to make sodas and encouraged him, to make his own creation.

He came up, with pineapple-black pepper soda. Let's say it like that - I was initially not convinced about this concept. However when I tried it, it turned out extremely interesting as well as definitely pleasant.
The acidity and exotic fruitiness of the pineapple is upfront and only as afterthought you can experience the taste and a little heat of the peppercorns.

However alcohol-free is not that much fun - and we ain't teetotalers! Lets booze this baby up!

J.P. originally suggested to use Ron Zacapa XO. While I like the idea, Zacapa is a bit too mellow as well as too expensive; sometimes it makes a lot of sense to make a really expensive drink, however for the moment, I would like to have the drinks rather accessible.

Well,  Pyrat XO is a fantastic [and often underused and underrated] rum and the pineapple black pepper soda seemed in my eyes to be a good companion. Little did I knew: we prepared the drink and tried - immediately this drink exuded greatness.  It is a combination made in heaven.

The bold heavy pot still aromas are pairing nicely with the exotic pineapple aromas which is by contrast highlighted by the typical orange zest characteristic of the Pyrat. The pepper tingles along with the rum funk and makes the drink complex, yet fun.

This drink is a flavor bomb - it is refreshingly low brow, though isn't at all pedestrian.
Cuba Libre - even Dark n'Stormy step aside!

You really have to try this drink. It will surprise you:

Fill a chilled highball glass with crushed ice [you can also use ice cubes - especially if you want to drink it outside]. Pour the soda into it, float the rum on top and squeeze a lime wedge into it.
Garnish with thin lime leaves and a mint sprig.

For the pineapple soda, cut fresh pineapple into small pieces. Put it into a container, add pepper corns and cover it with caster sugar [you could use fructose].
Let it macerate over night.
After almost all sugar has dissolved, strain off the syrup.
Add citric acid to the syrup.
Add soured syrup into a whip-siphon. Fill up with very cold club soda.
Close the siphon and charge it one cartridge CO2.
Shake. Let it rest for a couple of minutes.
Carefully release gas and pour soda carefully in an airtight bottle.

If you strained to much and if the pineapple pepper syrup seems too cloudy for your taste, you could use agar-agar clarification to make a perfectly translucent syrup out of it....