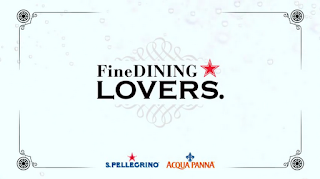 If you are following my blog for quite some time, you might realized my affection for chefs de cuisine and everything culinary.

I believe that chefs are miles ahead about discipline, work load, and non-nonsense. There are only very few bar personalities, which could show as much diligence as any typical Michelin starred chef [and even though, it is pretty hard to get one Michelin star, there are almost a couple of thousand chefs who have one and even a couple of dozens 3 star chefs - this would be the highest rank]. I guess, that Toni Conigliaro is one of those, who can be compared with great chefs. I don't know him personally, but read quite a lot about him - yes he is doing crazy sh*t...

The youtube channel Fine Dining * Lovers is actually created by S. Pellegrino. And while other companies always cross promoting their own product, Pellegrino is just showing a small logo of its brands and just concentrate on the chefs / wine makers etc. Kudos to them - others should definitely take this as example.

Please see below a video of Bellavista, an Italian wine maker... and subscribe to their youtube.com channel!