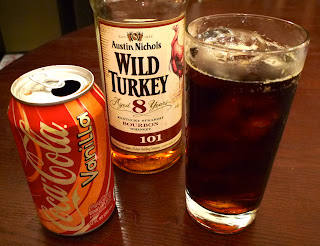 A couple of days ago, I have spotted the first time a Coca Cola Vanilla in the "normal" supermarket. Spinneys, Choithram and other specialty supermarket had it always... but usually for a much higher price.
I don't really know, why I have taken a can with me - I am a big sucker for normal coke [and here in the ME, it is still produced with real sugar] and I do love Cherry Coke as well. But once upon a time I used to hate Vanilla Coke. Because it was totally overflavored with vanillin. Artificial headache vanilla flavor. Awful!

They apparently redesigned the can - but not only this - they also [I don't know when] changed the formula. Gone is the vanillin, which was totally dominating. In is natural vanilla flavor which is not sticking out and is just a subtle note.
The ingredient list says, only natural flavors - and after tasting it, I believe it. Unfortunately the can comes from the US - means HFCS country.
But nevertheless it taste really good.

Now on my good mood, I have had to mix it with something. The first thought was rum - however then I thought, bourbon would be a much cooler choice. Again - 1st thought came to Baker's - but I chose a bourbon with some spicy kick [as the coke is already vanilly- I needed something with more character]. Wild Turkey 8 years old was it!

And it taste... soooo goooooood! Yes I know - it is not ultra refined. And the soda was not selfmade [I do however anyway shying away from doing coke; unlike the other sodas, cola is really complex and I don't see a way to make it better than the commercial version anyway].

And yes - you could infuse the bourbon with vanilla and use normal coke as well.

But if you just lazy at home, you tend to appreciate sometimes the simple things...