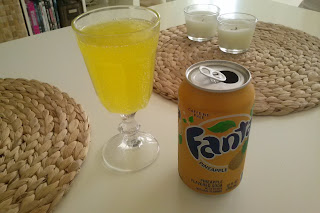 After the agave nectar scandal, nothing seems to be big enough to post about.

At it seems odd, that I am coming here to review a commercial and mass produced product. But hey- I do admit, that I love coke and really like some other commercial sodas. I only try to stay away of artificial ingredients.

This said, Fanta Pineapple doesn't start a nice relationship with me.
While the front states "Pineapple flavored soda with other natural flavors" - the ingredient list looks like a witches brew:

Well - that doesn't really look like my homemade sodas. Yes citric acid, sodium citrate [a simple product, when you let citric acid and bicarbonate of soda react], carbonated water… this is understandable. HFCS is obviously far cheaper than sugar - this is an usual occurrence in all sweet industrial thing nowadays. Same applies for sodium benzoate and potassium sorbate - unfortunately people would like to have a very long shelf life and both are preservatives. A short look on the expiry date though relativize this - the shelf life is only 6 month - this is a bit disappointing, and maybe the food chemist overdid it a bit here. Also: even if it would be pale white [or off white] it would be understandable pineapple - so why the food color??? I believe, it would have more marketing effect, to state: without artificial color, than using the color to make an impressive yellow…

All this theory besides, how is the soda?

Smell:
slight bubble gum pineapple aroma - tropical character with a funny hint of coconut at the end of the impression.
Taste:
Sweet upfront, with a definitive tropical pineapple aromatic kicking in. Nice acidity as well. It taste definitely better than pineapple juice from concentrate!
Afterthought:
Sweetness is quite lingering. Tropical flavors are moving towards coconut / nuttiness when the overall impression starts to fade.
Overall:
Surprisingly tasty pineapple beverage, which cannot though renege its industrial origins.


Yes - overall it is nice. Nothing to write home about, though overall pleasant.

Obviously it would not be able to compete a homemade pineapple soda at all. But rather than using 7up or Sprite [which definitely are as natural as this soda], it is worth to think about this product, when you are mixing up your rum [or gin - and if it is really necessary: vodka].

It would be adequate at home, but I wouldn't offer it in a bar.