Vacuum shaking experiment, and what I have learned

April 26, 2020
I have introduced a vacuum pump in the bar. No - not for pleasure... just for vacuum canning jars, which are then a) not floating when I put them into the immersion circulated water bath and b) keep ingredients far longer fresh. 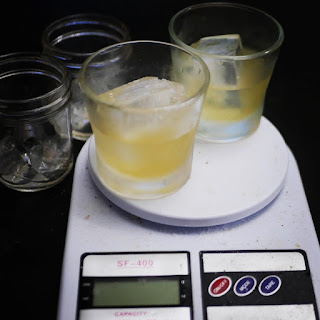 In my absence from the bar - and my weird quarantine thoughts (let's face it - weird bar thoughts aren't really deriving from the social distancing, I just have naturally weird thoughts) I had suddenly the question, what happens if you shake without air in the shaker.

Now, very few bartender could now say, that as soon as you shake, the air pressure anyway goes very much down (due to the retraction of air at lower temperature) - but a close vacuum is far different than a reduced air pressure.
And I remembered how weird (word of the day??) it is, to shake a jar when the air is removed. It should have an impact.

So I extremely exactly measured all ingredients: I used Rye, fresh lemon juice and fermented water kefir rich syrup - I used two small jars and kept it absolutely constant (even weighing the ice to the gram). Then I shook both at the same rate for 20 seconds.

I weighed both jars again (especially the left over ice versus the liquid). There was no particular difference (2g - but this could have been the result of different sized ice shards). I measured also the temperature and again it was pretty equal. The taste was also indistinguishable.

So - it doesn't matter? Not so fast. I have got the said designated vacuum pump on work - but at home I have "only" a chamber vacuum sealer - which can hold only tiny jars. The problem is, while I shook very long, I could not reach my favorite temperature (about -5ºC). That is a big deal! 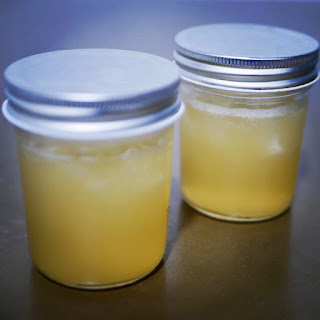 Hence the experiment was inconclusive about the vacuum.

However! There has been an important lesson learned (and has to be explored even more): size of the shaker matters. I always had the feeling, that a Boston glass shaker made better cocktails, and it seems that there is some truth in it - maybe not because of the glass (though I like the feeling of glass of half of the shaker), but due to the fact, that the classic combination of tin-glass is far "taller" than the more modern tin on tin Boston variant.

When I am back on work, this will be definitely worth an experiment (I haven't got a Boston shaker at home - just a Parisian shaker): comparing the different volumes of different shakers against each other - and then comparing the resulting temperatures and textures of the ice (texture of the drink in my eyes is very subjective).

Oh - the drink was a deliciou : 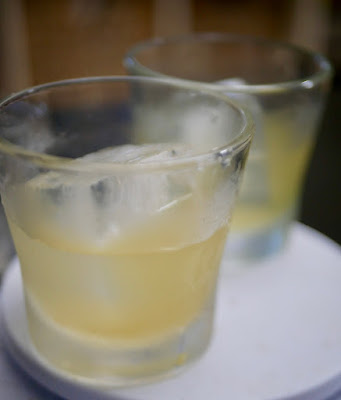 What was also surprising- even the drink wasn't as cold as I wanted it to be, it was pretty delicious - and the High West Double Rye became pretty smooth. That might have been the result of using water-kefir rich syrup (water-kefir is fermented based on white sugar for 2 days and then more sugar is added), which has a faint aroma (ferment'y vanilla like fragrance) - but more importantly it has a different texture which still adds to the cocktail when it is diluted.

So here you have it - an inconclusive experiment - but also some lessons I have learned without expecting them.