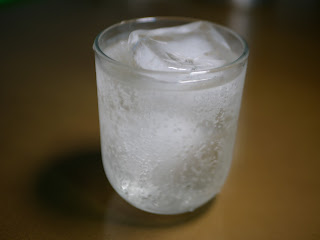 Today I have filmed a video. I hope, that I could become better in making videos about beverages - so I can spread the gospel of drinks...

So I prepped (in front of the camera) a good bottle of cream soda.

Cream soda, is basically vanilla soda. At times there are other spices or fruits also represented. However I intended to make a simple instruction video (so I can build upon) - and as I only had (real) vanilla essence, this was the easiest natural flavor I could think off.

Dissolve a sugar, vanilla essence & citric acid into a bit of room temperature water. When everything is dissolved add it to a carbonating bottle (Soda Plus in my case). Add the rest of the water and the ice. Charge it with 1 CO2 cartridge. Shake it. Let it rest for at least 1 minute. Release pressure and enjoy.

That is as easy as a soda can be. And it is delicious.

When I did all the filming and also added some audio dubs (is it called like that?) I had quite a lot of vanilla soda left. Soda is consumed very quickly in this (1 person / 1 cat) household...  however I didn't had a lot of booze in these days of social distancing - and I felt for tequila...

...unfortunately I just had a bottle of Porfidio Single Barrel Añejo left. While I would rather use a normal reposado or añejo, I just "had to use" these pretty rare tequila - but I didn't regretted it. The vanilla fell directly into the background - and it became one of the most amazing highballs I have had for a long long time. It just tasted as the Porfidio, however the vegetal notes were slightly balanced out, while the barrel spiced aromas came upfront. It lost its "heat" without being toothless. Gorgeous, gorgeous drink.

I finished it before I had the chance of adding lime or any other condiments. But it was just as perfect as it could be as it was... well - maybe I add just two drops of Angostura Bitters in the next occasion, I will have this drink!

You might ask, when will the video come out? Well - after I started to edit the video and ended up with a hot head and plenty of frustration, I decided that I will go the route of a professional editor. Hopefully within a week, I will be able to post the video... stay tuned!