Improving a Whiskey Sour with a Designated Cocktail Syrup 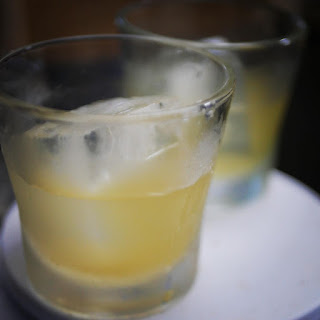 I did everything right: used quality bourbon, used proper ice, shook long enough, used fresh lemon...
yet the whiskey sour was slightly too lemony - it had enough alcohol, the right sweetness, the sourness - yet it was somewhat off. No - it was not somewhat off - let me rephrase it - I was not 100% satisfied with the results. It wasn't as good as the Whiskey Sour in front of my imaginary eye (or on my imaginary tastebuds).

Not that I tried a Whiskey Sour in another bar which has been better...

That sounds crazy to you? Welcome to my world...

The problem is that: as soon as I will change the ratios, the cocktail will also loose its balance... and to be honest, I don't really think, that solely tinkering with the ratios, will bring me anywhere...

I have been breaking down how to improve cocktails before on this blog. Look at every single ingredients and use the best suitable (that doesn't necessarily mean most expensive):

As you can see - there is not much, what you could do with the Bourbon (the "flaw" of the Whiskey Sour was not, that the Bourbon was not right...) or the lemon... and it was for sure not the rich syrup.

However while it is (at this stage?) difficult to procure some specific lemon-subspecies with lower lemon'iness. There seems a lot of opportunity to tinker with the syrup.

At this stage people are just using maple syrup, sugar or Demerara sugar instead of normal rich syrup. This is obviously also a way - but it will distract from the whiskey and ultimately make a different cocktail.

This new "opinionated-alchemist" concept (you have seen, what I did here?) is, to augment the typical aromas of Bourbon and make a syrup, which just "tingles" specific facets out of the distillate:

As you can see, in theory it seems not especially difficult to replicate a syrup, which emphasizes on the characters of a Whiskey Sour.

The question though is, should the syrup be especially concocted for a specific Bourbon (or: is this even possible?) or should it be a generic Whiskey Sour Syrup?

To directly start with a base which has more X-flavor, I would start with a fermented rich syrup (based on Water-Kefir).

Furthermore - I will for sure add some citric acid to the syrup. It sounds slightly awkward, but it has a very important reason: you can reduce the lemon juice, without loosing sweet/sour balance. And as an additional benefit, the syrup would stay longer.

Now it is just for you to wait, until some experiments are conducted (and probably, I will sleep out my upcoming hangover...). So- stay tuned.