September 24, 2021
Scotch can be very divers. It can be smokey and decisive, it can be floral and almost fruity - it can be delicate and really heavy and oily.
Long time ago, I have been on a whisky-convention and in a workshop, they guys at Glenmorangie gave us Glenmorangie "spirit" to try - totally unaged Glenmorangie. I expected to be harsh and undrinkable - but it was beautiful - extremely fruity (think Poire William) - if they would have sold it, I would have purchased it. In the same event, they have introduced the experimental release of Glenmorangie Artisan Cask (I purchased later the bottle). For a very young whisky it hasn't been cheap, but it was truly incredible. A testament, that Single Malt Whisky doesn't need a lot of cask influences (at least some delicate distillates like Glenmorangie).
Glenmorangie has shown for sure a lot of innovation. They also populated barrel-finishing - which is used now from most of the industry, to introduce interesting variants.
As LVMH purchased the brand, they received a lot of backing - and the bottles look amazing. But I also recognize, that there are far fewer unique things coming to the public. On one hand some brands (Duty Free) like Le Clos sells some uniquely finished Glenmorangie. And very few vintages. But the portfolio is mostly clean - almost surgical clean. There is some romance missing.
And the most obvious issue is the from my side "newly discovered" Glenmorangie X.
Look - it seems, that Glenmorangie wanted to cut a piece of the sales of Monkey Shoulder. But really it seems like a half-hearted concept: 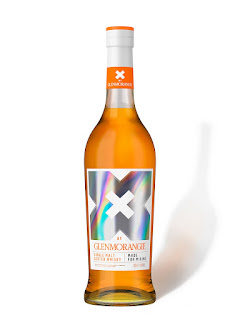 Personally it looks like product just dreamt up by Marketing. Yes - the master distiller was also bringing his experience. But I don't understand, why they created a product, which simply doesn't play to the strength to the brand - and also didn't really aligned the mixology suggestion to exactly this product.
Example: A very young whisky - maybe even filtered through charcoal (after aging) - not for the maximum effect, but to create a really unique light but distinctively aromatic distillate with loads of floral and fruity aromas.
Mixology: first - use proper bartender - push bars to use it - include competitions etc. Create guidelines, which suggest pear products also suggest light floral honey like acacia. But also: have some pizzazz about the mixing. The simplistic angle works as "add-on" but not as main attraction (especially if the product should be made for mixing).
And anyway - Glenmorangie should really create a Old Tom hybrid gin. As the distillate is anyway very light and fruity, it would work really well. This would also turn heads and would fill up LVMH pockets with money....