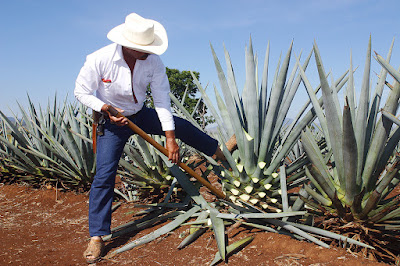 My previous post, told you about my finding of the "new" extraction / conversion of sugars in the agave.

If you are a tequila nut, you might have understand, what I meant. But for all others, please let me point out, which Tequila you should look for - which Tequila is a marketing rip off and so on.

First of all the obvious:

First: what is a mixto? Tequila can made only in the state of Jalisco (and in few other towns) - and it always has to be made from Blue Agave (Tequilana Weber Azul). However the fermentable sugars of the agave (>51%) can be mixed with other sugars (usually sugar cane).

We can pretty much say, that under Mixtos you will never find a great tequila - doesn't matter what. These tequilas are always inexpensive. Are they drinkable? Yeah... but I guess also a lot of people have their "tequila reaction" (no more) because of too much mixto.

There is a difference between highland agave and lowland agave. While the difference is noticeable, other factors are far more important than where the agave came from.

This is a big one. There is a noticeable difference between brick ovens and autoclaves - but most people, would not be able to put there fingers on, which one is better (brick ovens are more traditional and take far longer and are far more work intensive - autoclaves are basically big pressure cookers).

However now it comes: the Diffusor with its acid-thermal hydrolysis makes significant difference. In the best cases, the tequila is less distinctive and just lighter with less complexity. In the worst cases, it can even have harshness and chemical notes. You should go for tequila made in brick ovens or autoclaves!

► Extraction methods (Tahona vs. Roller Mill) & Fermentation (with or without fibers):

Let us first of all get the elephant out of the room: as discussed in the previous point (extraction), the diffusor also extract the juices out of the piña - and this is the worst way. However as we already eliminated the diffusor - there are only two other methods left.

Tahona (a big stone wheel, which crushes the piñas to mush) is the traditional and less industrial method. However most people could not discern which method makes the tastier tequila.

Tahona crushed piñas also will often fermented with the fibers. This creates more depth and funk. But on the other side, it is also more difficult (and can create issues). And: again most people won't be able to tell, which one is the better methods, based on the tequila they drink.

Tequila has to be distilled twice. And I would love to say, that Copper Pot Stills is the best method. But the topic distillation is very complex. Let's say, in a rather simple setting, people working hard and simple with tradition, a copper pot still is an ideal device. However the Patent Still gives you so many options, that a real genius distiller, can make incredible tequilas (or other spirits) in a column still.

It also depends on your taste: small pot stills make a distillate, which is robust, while column stills are usually making spirits, which are lighter. The choice doesn't become easier, when you are looking at system sizes, at hybrid materials (stainless steel stills, with copper plates and so on) and so on.

At the end you should use a 100% agave tequila, cooked in autoclaves or brick ovens.

Simple. The rest is totally a thing of taste.

What is about the age of Tequila? Which age certificate is the best?

This is again a highly discussed topic, but there is no proper answer to it. Mexicans, which love the authenticity and the robustness of the agave, would rather select blancos (0-2months in oak) and reposados (2 months-1year in oak). Americans and often Europeans, which are used to barrel aged (premium) spirits are often inclined for añejos (1year-3years) or even extra ańejos (3 years+).
And we didn't even talked about cristalinos and other unique tequilas (e.g. quality joven, which blend tequilas from different ages)...
It is clear, that the older tequila, the more expensive it becomes. But everybody has to understand - it doesn't have anything to do with its quality!