Why we can't have a good Apple Martini 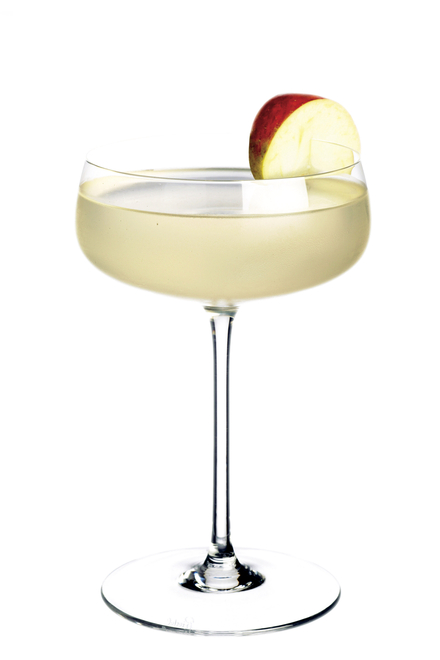 Ok... provocative title - I know. Let's directly spoil the resolution: we can't have a good Apple Martini, because the original "Adam's Apple" (how it was originally called) is not a Martini cocktail - duh!

There is a fantastic and very expansive article on Eater.com.

In this article Jeffrey Morgenthaler said, that it is not possible, to make a good version of this drink, because using fresh juice isn't just the same.

True. But it is better. Let me explain.

We can basically go two ways. One way is the way of being incredible sophisticated and also very pretentious. We can think of making a real Martini out of it.

We can make a vermouth from a nice slightly sour cider. And then we could use gin (yeah - we can also use vodka - but what is the point?). Some bitters. And maybe something like a low temperature poached apple ball (made with a melon baller).

The problem: It is almost not recognizable as a "Apple Martini". Yes it is cool and all. But only for nerds (like us). Not for normal people.

The second way is far more enticing. We first of all change the name. Let's say "Adam's Apple 2.0"?

Anyway - then we are slow juicing apple juice (ideally out of peel only). I am 100% positive, that Jeffrey went this route. But wait a moment.

The drink is sweet and sour - and has a strong apple taste. Add lemon juice - and the apple get lost. Add sugar syrup, and the dilution will also reduce the allure. Instead use caster sugar, which you dissolve in the extracted apple peel juice. And add citric acid - or even better malic acid to sour it.

Food acids are used in many foods - and they don't distract from a quality product. Yes - you could argue, that these products are highly processed - so is caster sugar or salt.

Eventually you could use a vodka (or gin!) which is a bit higher in abv, which will result into a snappy little cocktail. Orange bitters? Why not!

Obviously there is another way - which is totally insane - but hey...